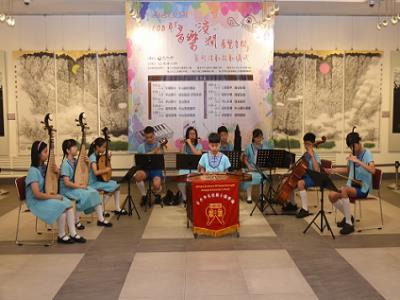 To greet the coming of the scorching summer, National Dr. Sun Yat-sen Memorial Hall held the opening ceremony of the series activities of “2019 Music in Exhibition Space” at Chungshan National Gallery at 2pm on July 11, 2019. The hall invites “Zhongshan Elementary School, Zhongshan District, Taipei City,” “Guangfu Elementary School, Xinyi District, Taipei City,” “Taipei Municipal Renai Junior High School,” “Wego Private Bilingual High School,” “Juang Jing Vocational High School,” and “Taipei Municipal Zhong Shan Girls High School” to give the music performance at the exhibition rooms. There will be eleven performances in total from July to August. It will not only let the school societies in the strategic alliance show their versatility but also present a different look to the exhibitions and create the art feast integrating vision and music.

The director-general, Liang Yung-fei, is not only a calligrapher but also a vocal music lover. His passion for music is not second to calligraphy. After assuming office on September 25, 2018, he has actively thought about the combination of music and visual art to create the exhibition different from tradition by infusing music into every corner of the exhibition so that there will be different expressions of the exhibits with music. At the speech of the opening ceremony, Director-general Liang announced that the series activities of “Music in Exhibition Space” were officially launched. The memorial hall is the first to propose the concept, which has four meanings. 1. It is a pioneering and innovative thinking: It is expected that in the future the music departments of universities and colleges and the art cultivation teams will join us after this trial and the level will be gradually raised. 2. It is an interdisciplinary experiment: Visual art can be regarded as a form of voiceless music. When the two are combined, they will create more concrete perception. 3. It will provide the students with a stage to perform: We are grateful to the six schools in the strategic alliance for their assistance. It is required for the government to offer the students the space and stage to show themselves. The central and local governments should stand with the schools. 4. It actively shows respect for artists: By giving the music performance at the opening ceremonies of the exhibitions, National Dr. Sun Yat-sen Memorial Hall shows respect and encouragement for the artists, which is part of the quality service we provide.

The first activity was performed by the Chinese music orchestra of Guangfu Elementary School, which is going to participate in “Vienna International Choir Competition” on July 15. The great performance won a round of applause. Xu Jin-hua and Wang Pei-ni, who joined the performance, said it was their first time to perform in front of the paintings in the exhibition space. They felt very happy and hoped to be invited to perform again. Attending the opening ceremony, Principal of Zhongshan Elementary School, Chen Guang-yin, expressed his gratitude to National Dr. Sun Yat-sen Memorial Hall for offering the stage to build up the children’s confidence and raising the visibility of their performance. He also invited the audience at the scene to enjoy the performance at Yat-sen Gallery and De-ming Gallery at 14:30 on July 13 by the students from his school.