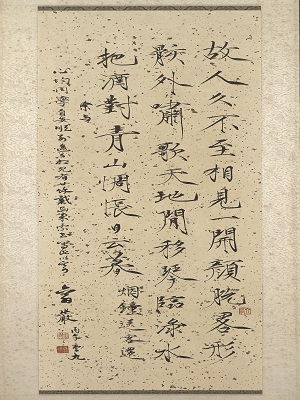 The opening ceremony of “A Passion for Calligraphy and the Palace Museum: An Exhibition Commemorating the 120th Birthday of Deputy Director Chuang Yen,” host by National Dr. Sun Yat-sen Memorial Hall, took place in the afternoon, March 31. The exhibition will be grandly held at Chung-shan National Gallery and Wen-hua Gallery of the hall.

This year is the 120th anniversary of Mr. Chuang Yen’s birthday. At the opening ceremony, the director-general of National Dr. Sun Yat-sen Memorial Hall, Liang Yung-fei gave the welcome speech, in which he esteemed this exhibition as one of the most important exhibitions in the history of Taiwanese modern art and the largest exhibition ever since the opening of the hall. With the most exhibits (374 pieces in total) and the largest exhibiting area covering Chung-shan National Gallery, Wen-hua Gallery, and Culture Corridors (2F), the exhibition has the longest duration and most diverse exhibits. The three museums, National Palace Museum, National Museum of History, and National Dr. Sun Yat-sen Memorial Hall, collaborate to present the precious exhibits, which is of great value and meaning to construct the history of Taiwanese art.

Director-general Liang praised the Chuang family as the “first family” of art and literature in the Republic of China. This exhibition includes the “five Chuangs,” Chuang Yen and his four sons, Chuang Sheng, Chuang Yin, Chuang Zhe, and Chuang Ling, as well as his third daughter-in-law, Ma Hao, and fourth daughter-in-law Chen Xia-sheng. It is a domestically unprecedented and internationally rare exhibition.

The exhibition is divided into four sections: “Half Century at National Palace Museum,” “Calligraphy Gleam,” “Friendship in the Chinese Ink Art Circle,” and “Excellent Art Achievement.” The historical pictures, documents, certificates, letters, and calligraphy and painting works are exhibited to present the relationship between Mr. Chuang Yen and National Palace Museum. The exhibition also presents Mr. Chunag Yen’s lifelong selection of calligraphy art and his corresponding letters with the artists Tai Jing-nong, Zhang Da-qian, Fu Xin-yu, and Huang Jun-bi, as well as the teachers and friends of Peking University and colleagues of National Palace Museum. Through this memorial exhibition, we will commemorate Chuang Yen’s ordinary and extraordinary life.

Director-general Liang specially mentioned that Mr. Chuang Yen and Mr. Zhang Da-qian were both born in 1899. This exhibition takes place in the same period of “Silhouette of a Great Master: A Retrospective of Chang Dai-chien’s Art on the 120th Anniversary of His Birth,” at National Palace Museum, which indicates that Chuang Yen and Zhang Da-qian are good friends of the same age. Zhang Da-qian’s eldest daughter Zhang Xin-rui, sixth son Zhang Xin-cheng, his wife Mai Xin-shu, and fourth son-in-law Wu Jun-wei also attended the ceremony.

In retrospect, Mr. Chuang Ling believes his father’s making a good example is the most influential in the growing process of the sons. His father emphasizes “interests,” encouraging the sons to pursue their own interests. Therefore, the Chuang family members do not pay attention to the material life but to the pursuit of performance in the ideal of art and literature and the contribution to the society. Besides, he exhibits the elegiac couplets made by Mr. Tai Jing-nong and Mr. Zhang Da-qian in memory of his father and the photo of the three elders taken together by him to commemorate their precious friendship.

Director-general calls on the public and the visitors never to miss the exhibition with stories and warmth, showing the touching love of family and friendship. “A Passion for Calligraphy and the Palace Museum: An Exhibition Commemorating the 120th Birthday of Deputy Director Chuang Yen” will take place at Chung-shan National Gallery and Culture Corridors (2F) from March 31 to May 26, 2019 and at Wen-hua Gallery from March 31 to April 28, 2019.